I believe each kind of travel has its own effects on the traveler. To start with, let me categorise my travels to three. Urban Travel to be in awe of visible developments brought in by humans, Rural Travel to explore the true world and Nature Travel to explore your ‘self’ through nature. In any ways, travel is always a way to learn about ‘you’ and the ‘world around’ that you live in. There are other two categories that people talk about. ‘Adventure’ & ‘Spiritual’. But somehow or the other I feel these also fall into the same three categories I mentioned above as far as I am concerned.

My last travel was a combination of all the three. I experienced the City of Joy ‘Kolkata’, the positive vibrations of ‘Shantiniketan’ and got spellbound at the nature’s wonders in ‘Sundarbans’. This was one of the travels I have done in my life that really moved me internally and externally. Travels with family and traveling alone have different dimensions. Like most of the travels after marriage, this travel was also along with my family. And I think they felt very happy.

Kolkata consumes you, Shantiniketan enlightens you and Sundarbans actually helps you to know the true world you live in and also helps you to let you know yourself through nature.

As I will not be doing justice to put all the three places in one document, I have decided to go one by one. First, I will cover Calcutta (Kolkata), and then the other two separately.

Like in any cities across India, Kolkata also has her own Beauties and Beasts. And they coexist in total harmony. One difference here is that there is a definite culture vibrating always. It has all the woes of a city that was forced to grow inorganically in a rush to contain the ever increasing natives, invaders, rulers, the migrants and then the refugees. The two massive Bridges across the Hoogli River are the living testimonies of the new and old city which was just one City of Joy! The famous Howrah Bridge (Rabindra Setu), the busiest cantilever suspension bridge in the world commissioned 1943, is a monster made of steel that symbolises the old city. The bridge does not have nuts and bolts, but was formed by riveting the whole structure. The new Wired bridge (Vidyasagar Hoogli Bridge – Dbitiyô Hugli Setu), the longest cable–stayed bridge in India commissioned in 1992, shouts about the growth in the thoughts of the people that inhabit this wondrous city!

The heavy honking of the vehicles I have never heard in any cities all through the trip started from the time I was waiting at the Airport for the car from the Hotel. I think all who drive there enjoy honking. The justification given by my driver was that ‘you need to shout to be heard!’. I suddenly remembered Arnab Goswami who started his career from the very same place. Some of the striking visuals are very normal to any city but thought of sharing as I found them interesting. 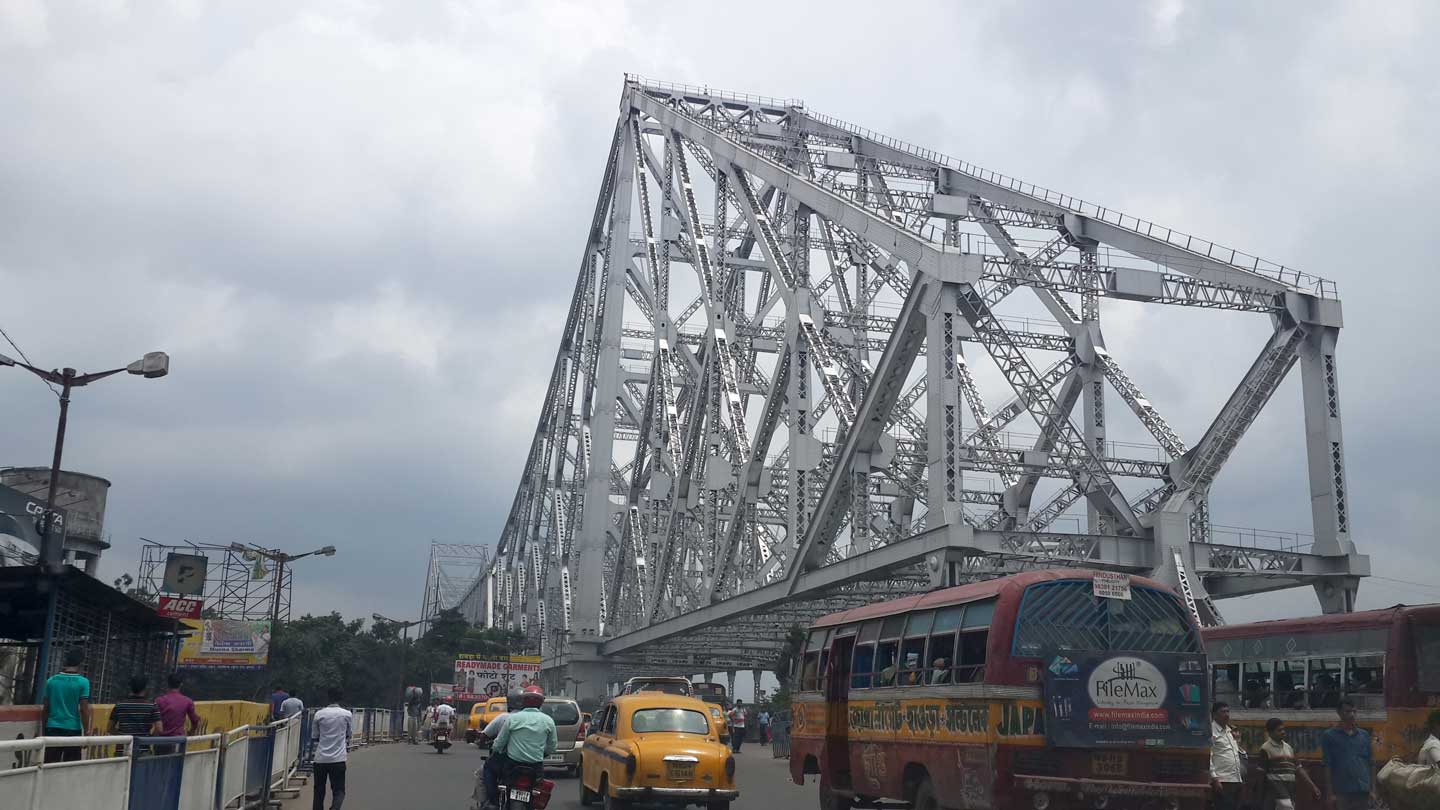 Rabindra Setu – Howrah Bridge as we all know

The massive intersection that holds the bridge together

On one side we see dilapidated buildings ready to fall but life reverberating inside and on the other side we see designer buildings and colonial left overs which also throb with life. I was amazed seeing the unique visuals of plants and even trees growing on top of the buildings in which people live. I tend to think that those buildings are actually standing erect because of the roots on them! And another side of the trees on building site was the plants grown on the chimneys of the erstwhile factories that are condemned to natural death. Certain British shipping companies are also included in this. I am told that many of those buildings that were deprived of any renovation or demolition are due to litigation. Not surprised because the state is populated with a very politically aware bunch of people. 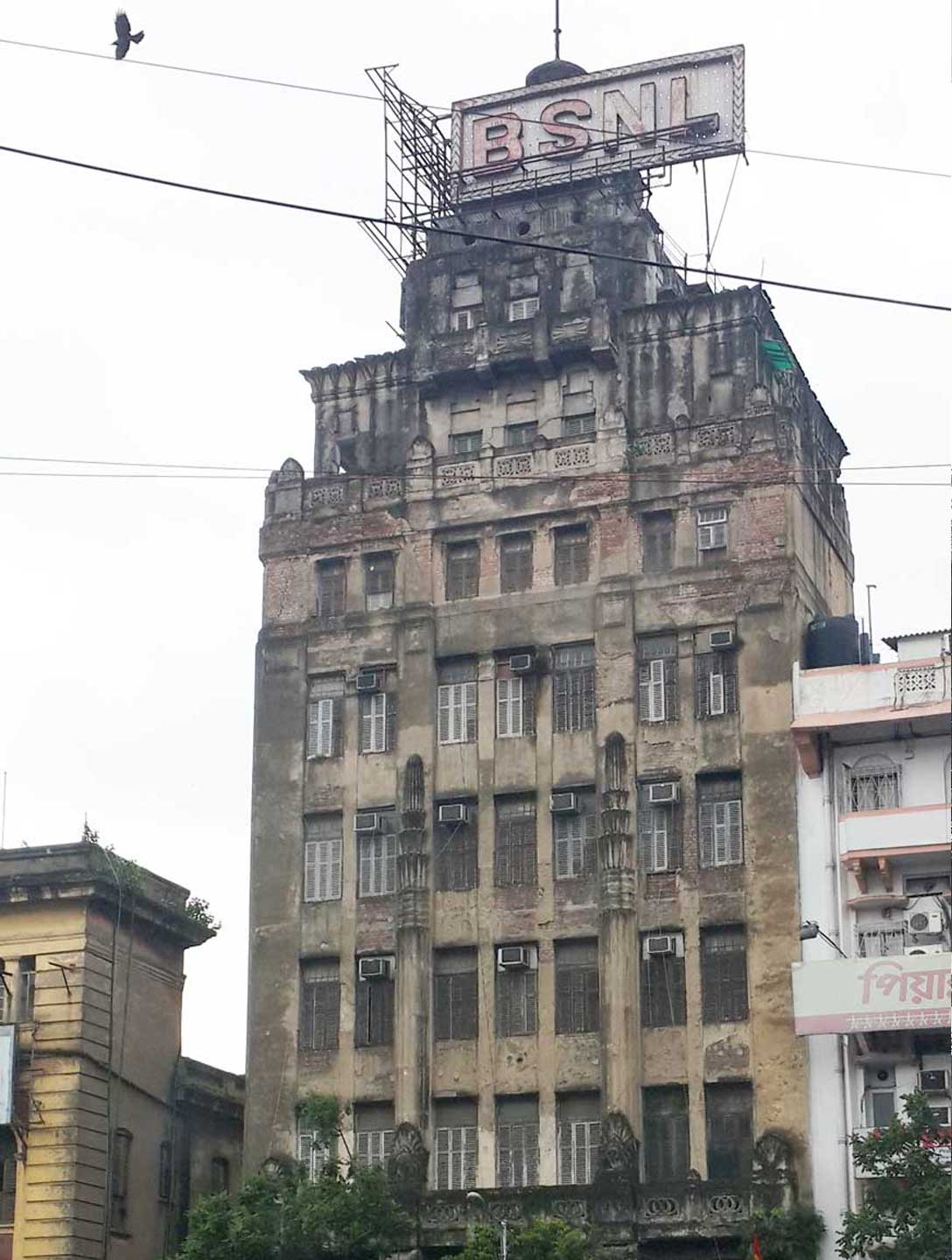 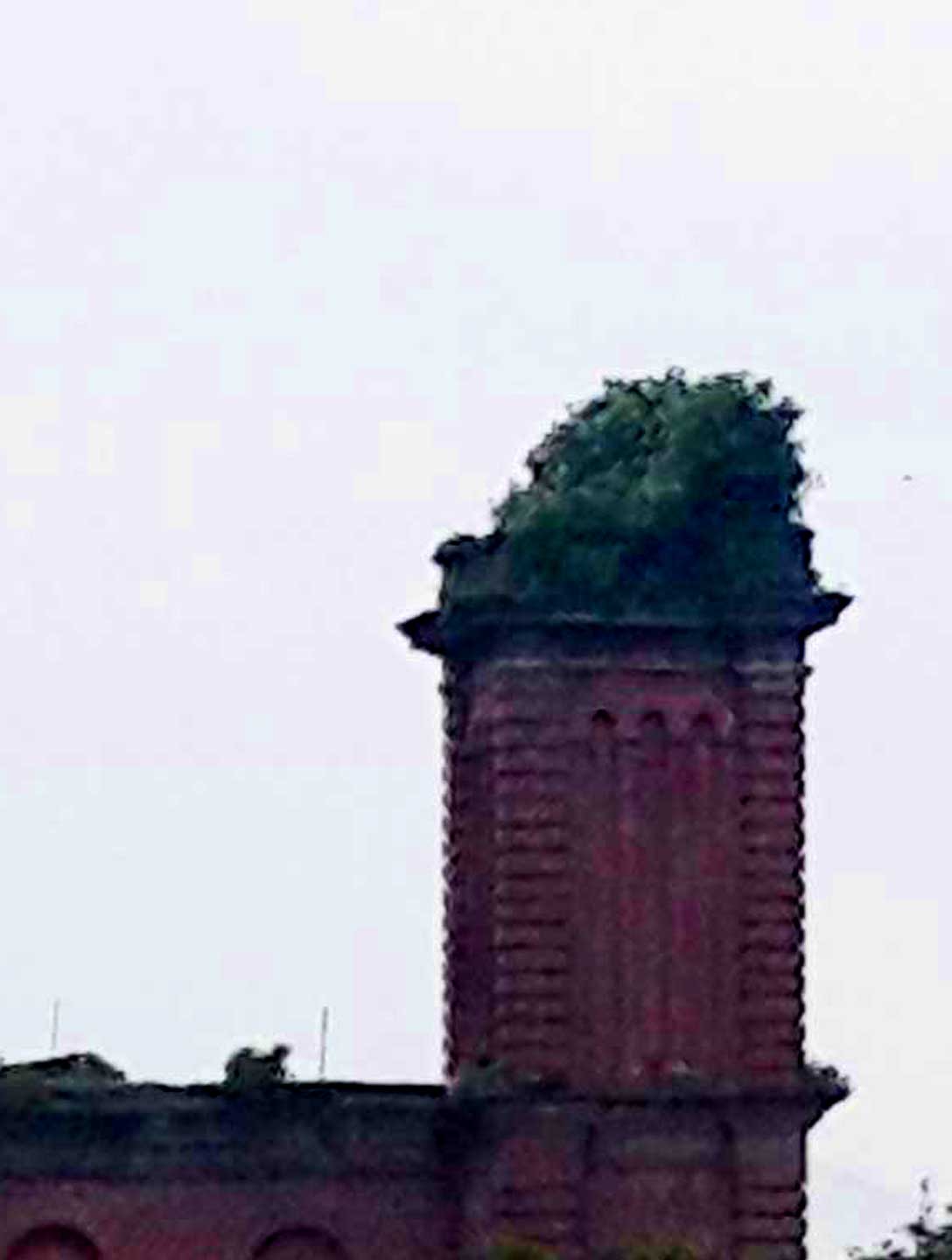 Your chest swells when you see the football grounds of the famous clubs Mohammedan Sporting Club and Mohun Bagan A C. You feel proud when you see the birthplace of Tagore! You feel exhilarated when you imagine that you are walking through the streets and roads where once greats like Tagore and Ray walked! You feel proud when you remember that you are in the land that gave birth to the likes of Subhash Chandra Bose who never believed in getting freedom from the British by begging. Many many more names in that list that never seem to end. I am sure their vibrations can never die out. Alas! Are we really seeing the same now? Are we feeling only the remnants of the lost glory?

Seeing a hoarding, my daughter asked me, “Achha, is Mamata Banerjee a Muslim?” Then I noticed a poster with ‘Didi’ offering Namaas (A Prayer normally done only by Muslims). I just told her that Politicians do not have any specific religion. All of them call themselves secular. I didn’t want to pollute her thoughts saying the facts and I do not want to discuss politics in here. Anyway, these pictures are very special to West Bengal!!! 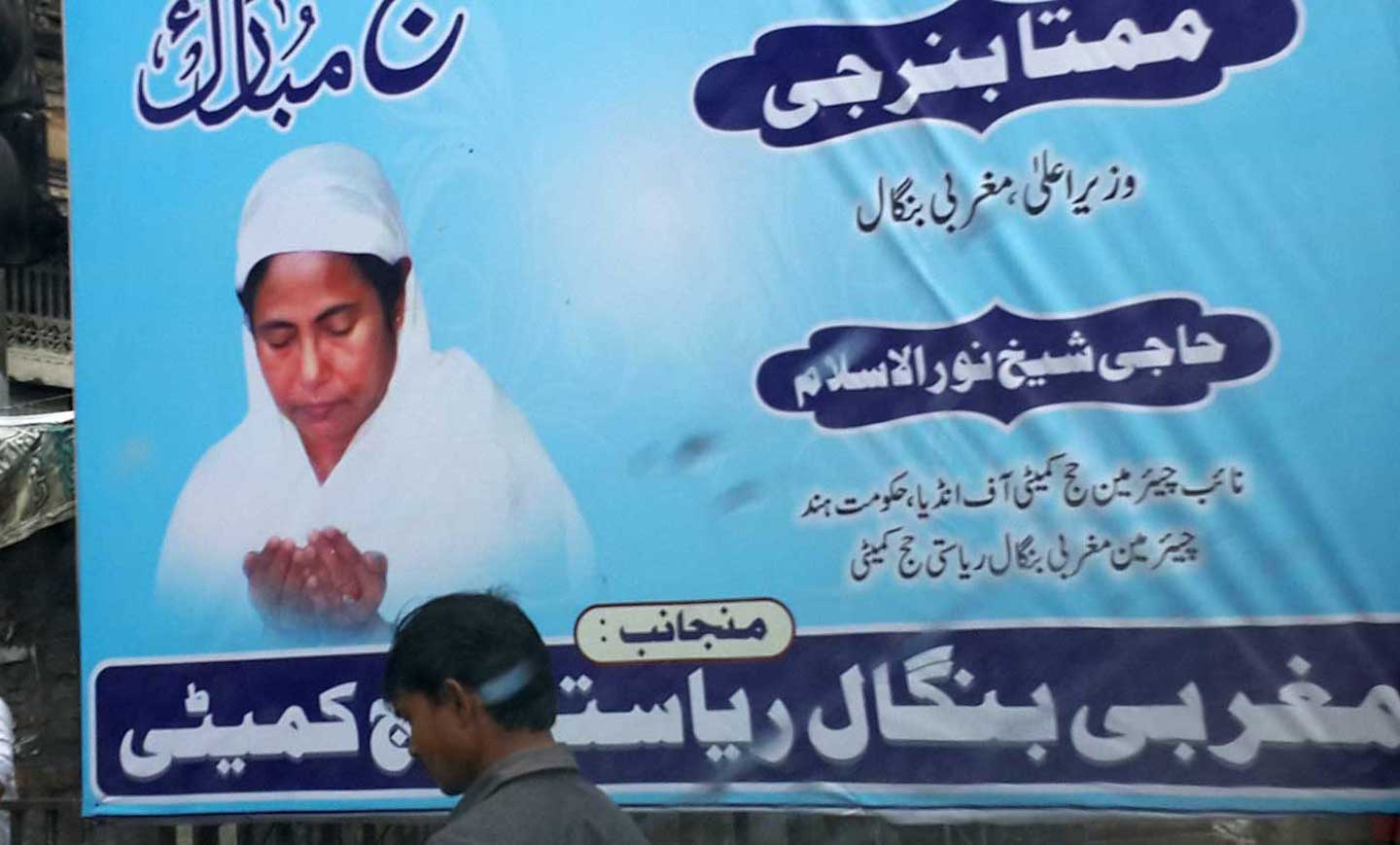 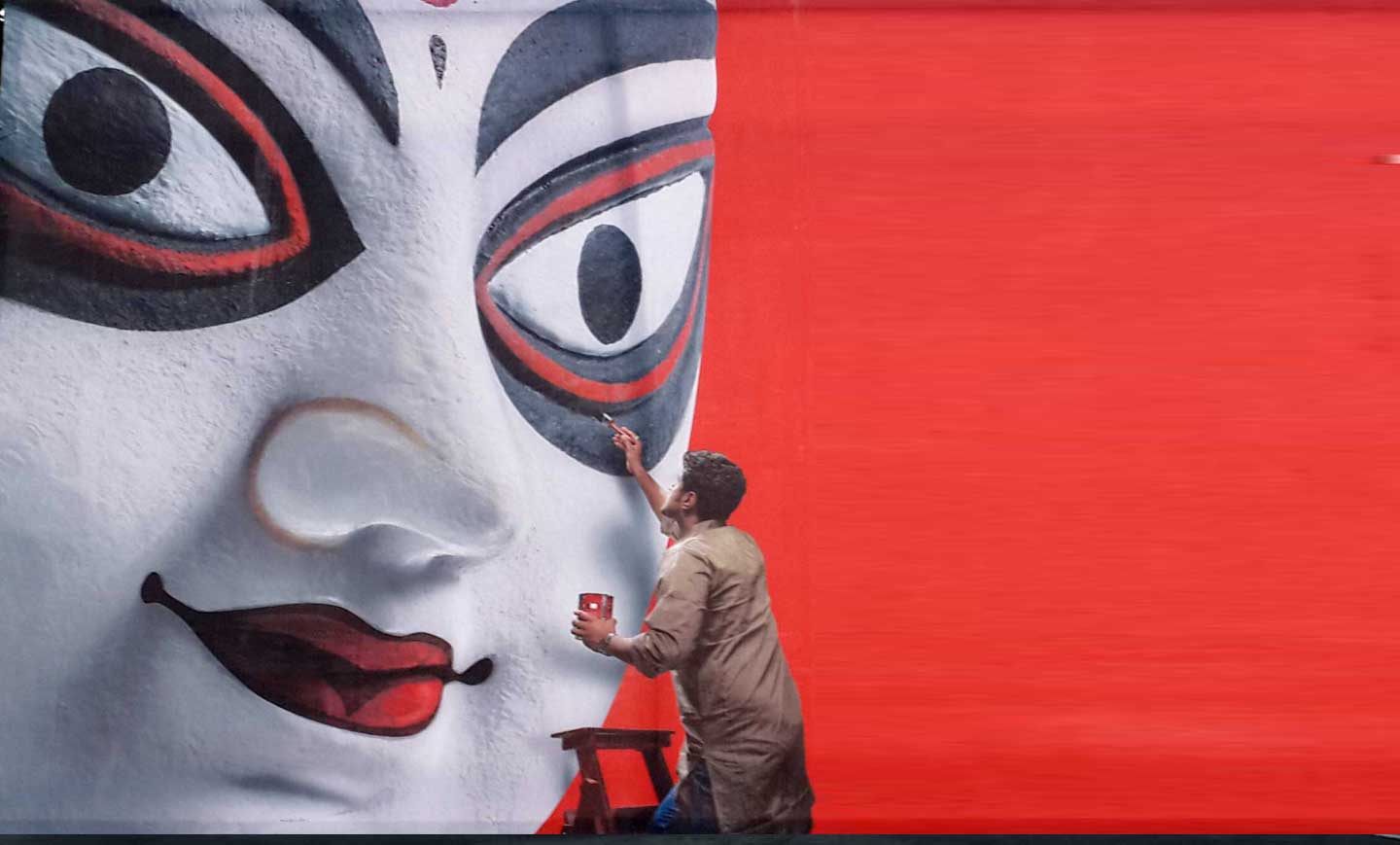 Interesting Ad for a Cement Company 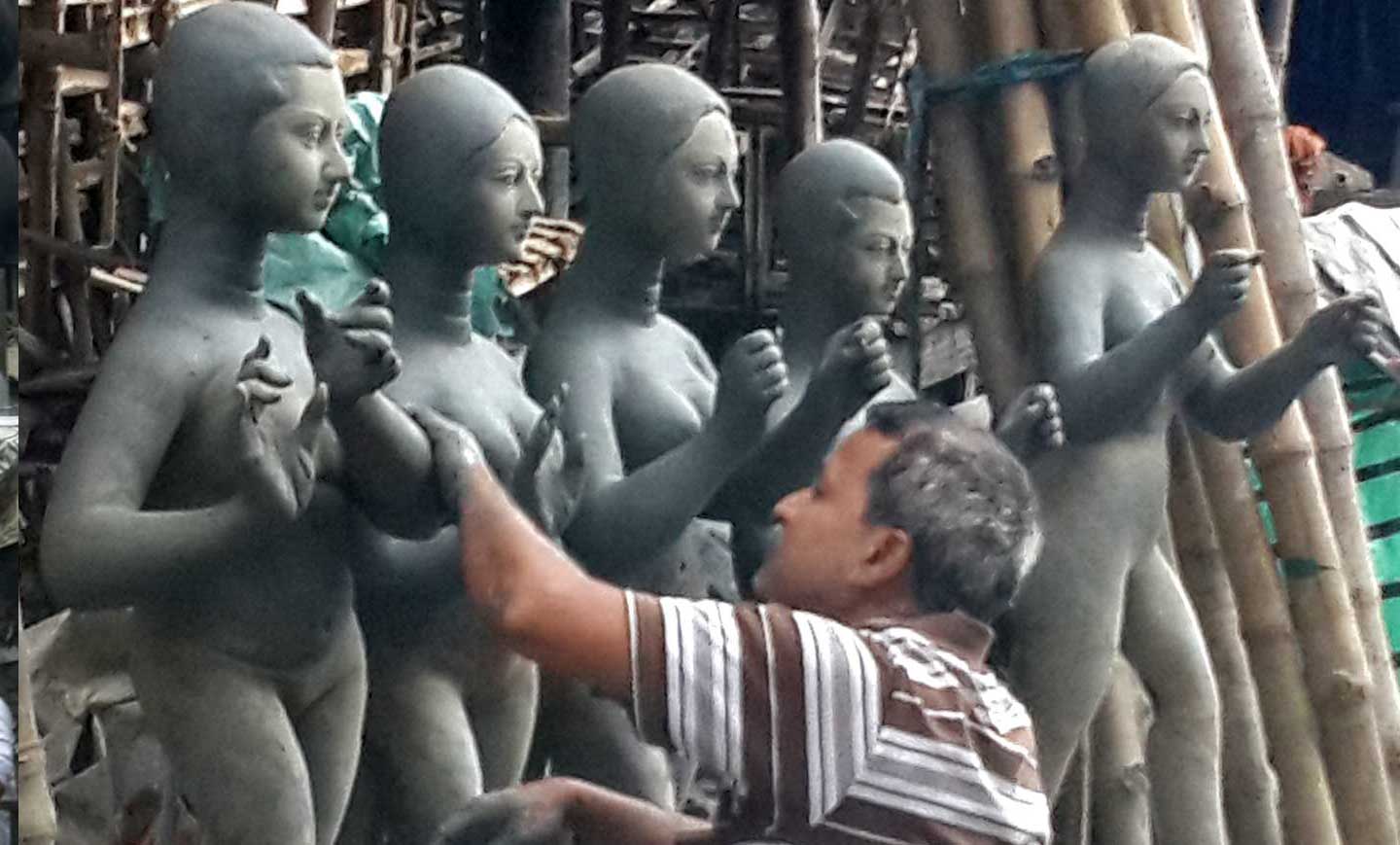 Getting ready for the big day!

West Bengal should be proud to have different kinds of Rickshaws. Rickshaws pulled by men, Rikshaws working on Water Pump Motor, Rickshaw working on normal fossil fuel and most interestingly Rickshaw working on Battery! That is called TOTO there. Very cute name indeed! The last one looks very thoughtful. No noise, No pollution and very stylish. The Battery Rickshaws are special with great style as you can see. Kudos to whatever small contribution towards reducing pollution! 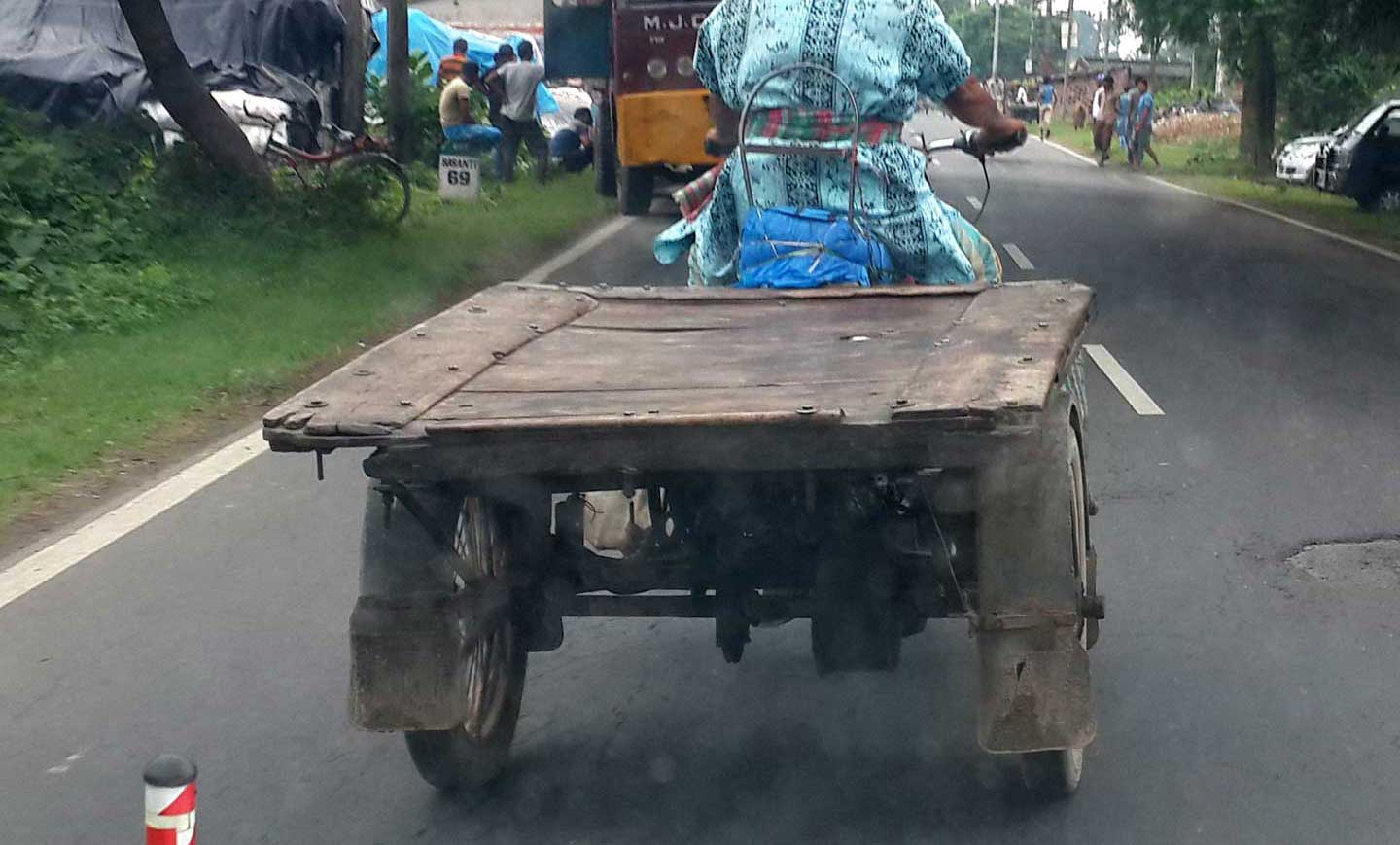 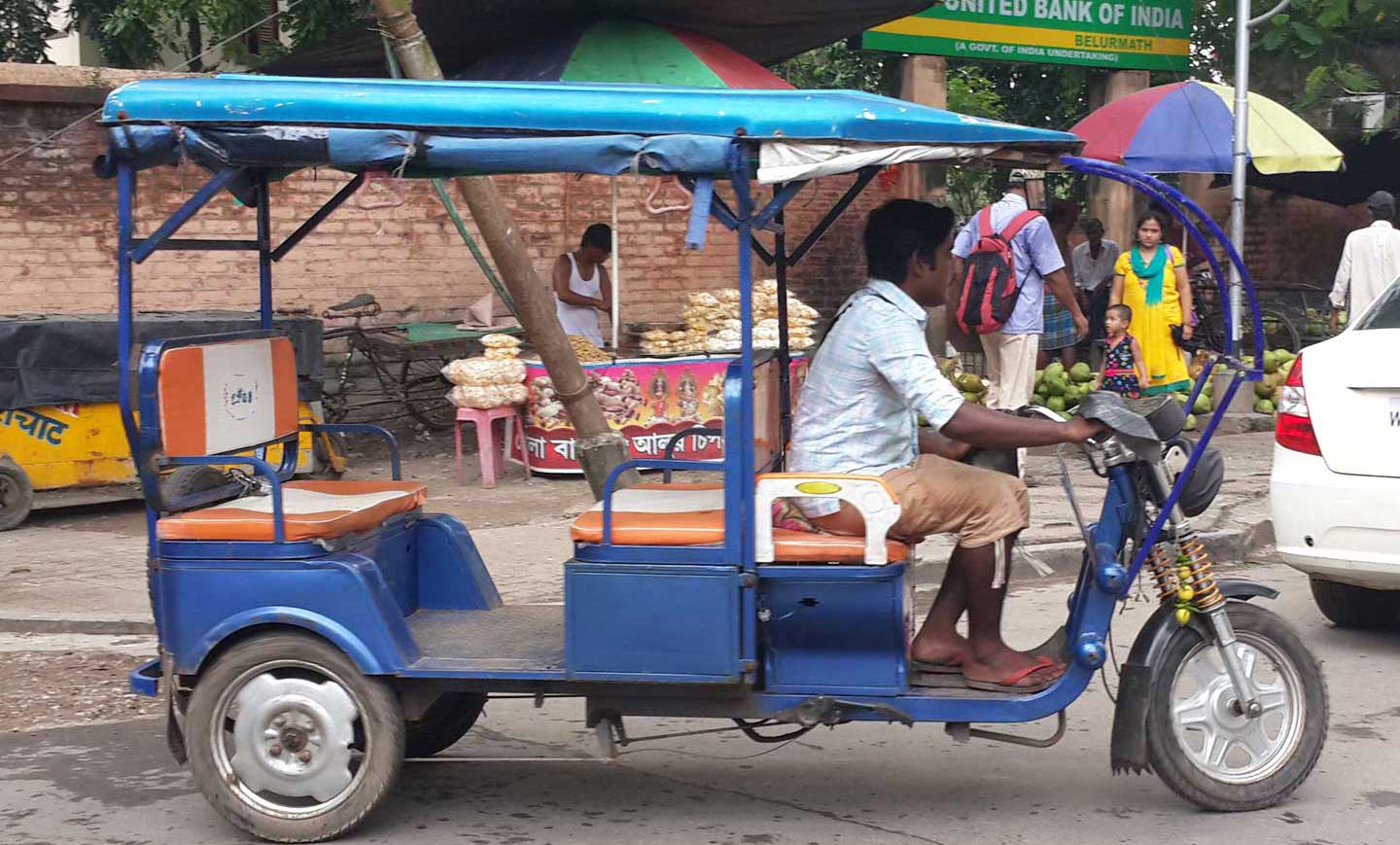 THE NATIONAL STRIKE – The day I will remember for good reasons!

On the 2nd of September, the Trade Unions declared a nation-wide strike. Though we had to stay indoors for most of the day, we had a wonderful experience. We ‘experienced’ Kolkata’s own TRAM RAILWAYS, Kolkata Taxi and Kolkata Metro. I was told that the only thing worked on that day was Tram and we decided to try that. We were staying just opposite to the famous Kalighat Temple, another landmark of West Bengal, from where we were supposed to be picked up for our Sundarbans trip. We walked slowly to the main road and we saw that wonderful creature moving slowly but in a magnificent way. In Sanskrit, there is a saying ‘Gajaraja virajita mandagati’ which means ‘moving slowly and majestically like an elephant!’ We felt the same seeing the age-old tram with two bogies moving leisurely across the road vacant due to the strike called by the Trade Unions.

A quick Video edit on my Tram Travel (1 min 34 sec)
Though the pair of bogies is totally in bad shape, it had its own beauty. It had its own style. We decided to take a ride. We saw it going into a garage/parking and we waited. And when another one came out, we boarded. It was getting dark already. The interior of the tram, though looking very old and rusted in some places, was pretty neat. It had huge ceiling fans the cover of which almost touched the sides of the compartment. I went to the front and explored the Pilot’s room. It was very simple and only a couple of levers. That’s it. 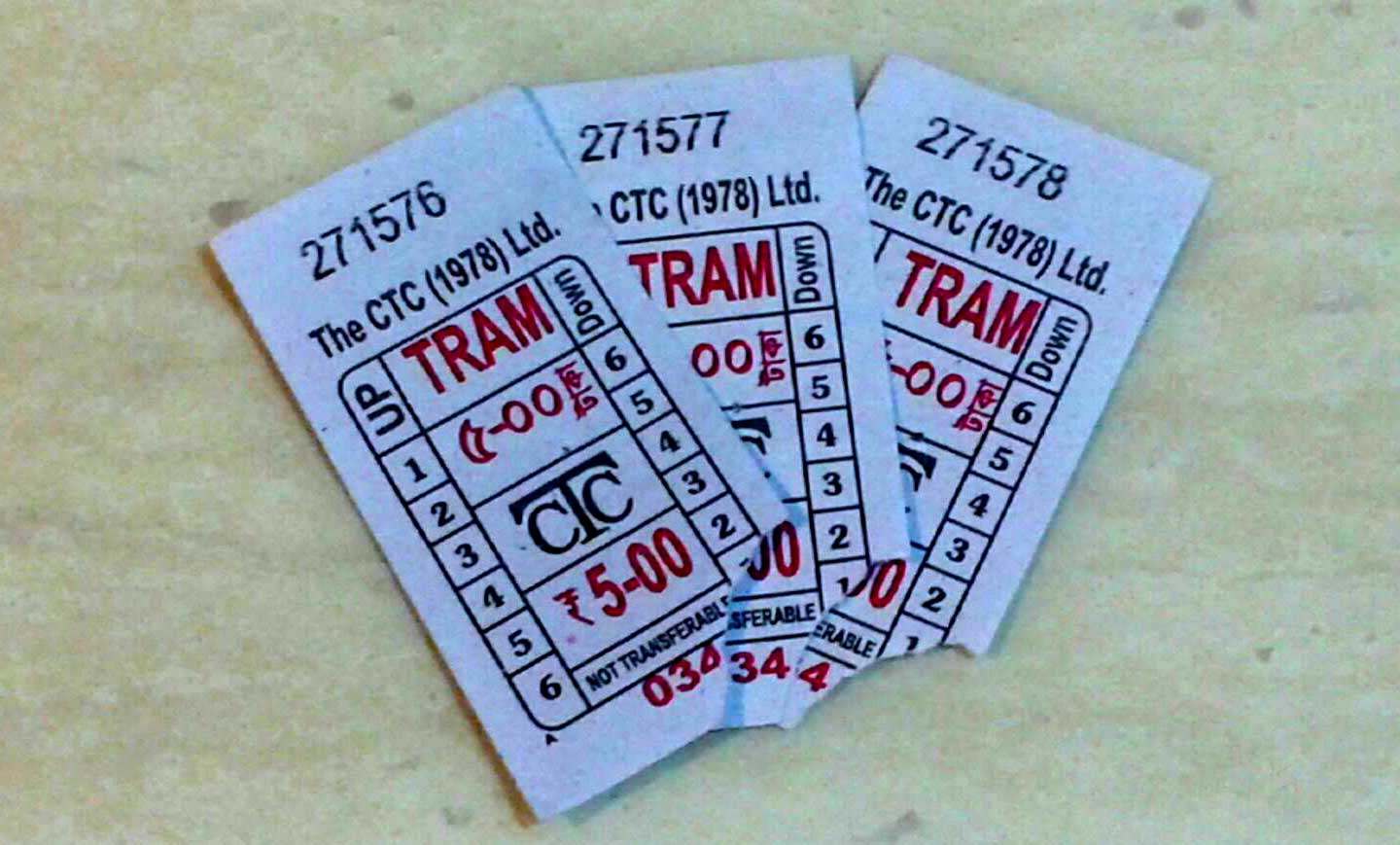 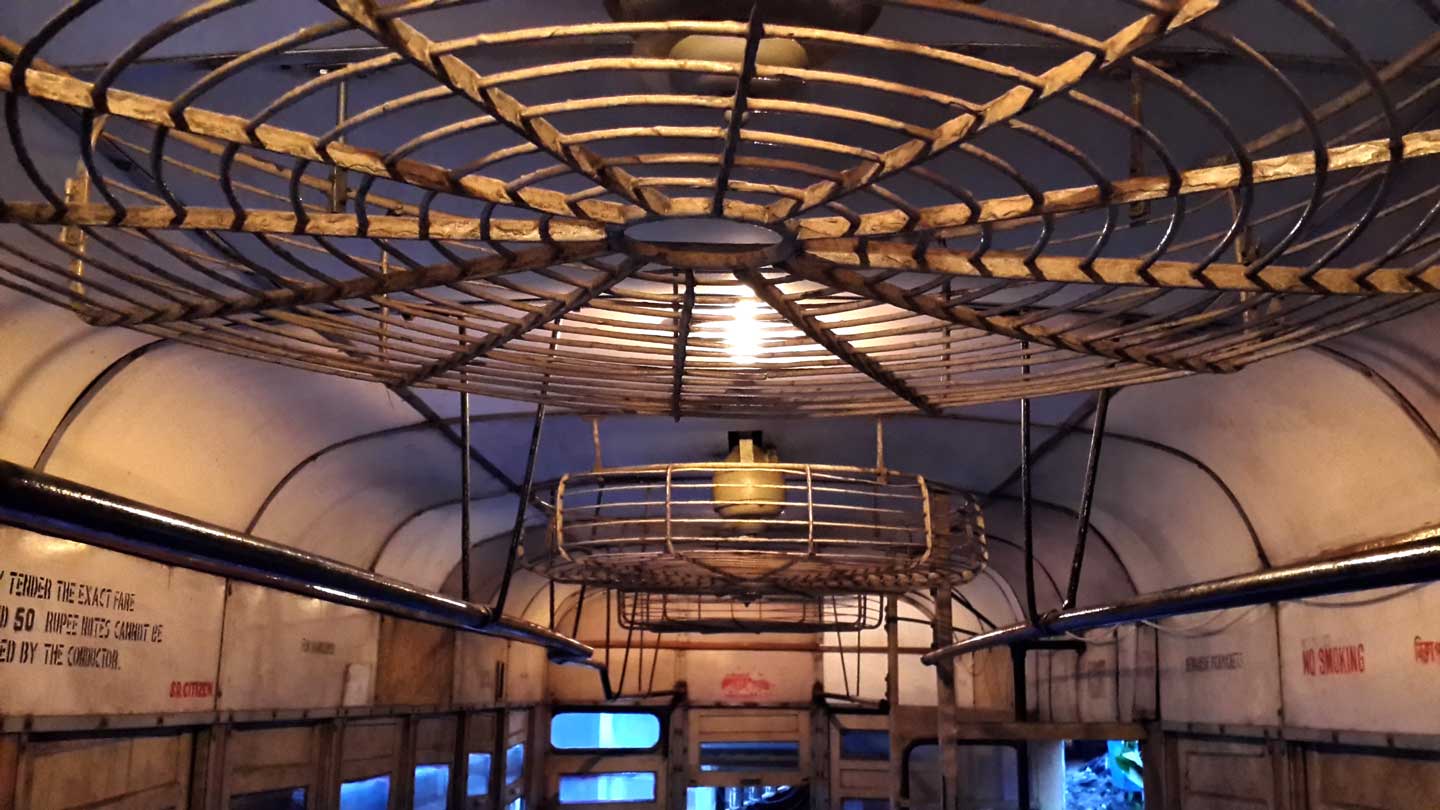 I managed to take a closer look and I found that the Tram was made in Japan and the Manufacturer Fuji Electric’s logo was embossed on the Control Panel. We had a wonderful noisy rickety ride from Kalighat to Tollygunge. Tollygunge had a large garage where many trams were under maintenance. We came out and decided to go back to Kalighat by the fast Metro to feel the difference. Then there was a sudden rain which rained cats and dogs. We took a taxi from where we stood under a shelter to the Tollygunge Metro Station. The underpass to the platform was decorated with wonderful portraits of Satyajit Ray. Wanted to take a photo but could not as photography was ‘prohibited’ beyond a certain point. There were enough cameras all around to get our images. So with this short outing, we traveled on Kolkata Tram, Kolkata Taxi and the Kolkata Metro… WOW with that Kolkata got merged into me…

Looking at the rising Sun, we bade goodbye to Kolkata for now