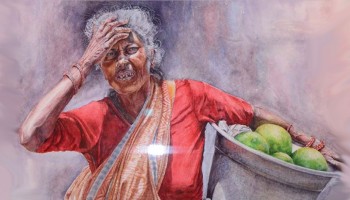 The woman with warm hands!

During my school days, when I visit my ancestral village in Travancore during summer vacation, I used to see a very old woman. She must be in her mid-70s. She was a mystery, at least to me. Her hooked nose and hollowed eyes. Her sunken cheeks and twisted lips, her snow-white hair and shabby clothes made me wonder who she was! But I didn’t have the courage to go near her or speak to her!

Many years after, one day when I was accompanying my youngest aunt to the village for a puja in my ancestral Temple, I saw this old woman who now is very old and looked distraught. I thought my aunt would be the right person to tell me the story behind this mysterious old woman.

She said “Oh, Kayyamma? She was the only midwife of this place. Once upon a time, she used to be a terror for all, especially girls. All pregnant women were afraid of her as she was ruthless. Women even used to whisper among themselves ‘after all she is a spinster! That too, a healthy one! How could she know about labour pain as she has never been pregnant or delivered any child even though she is laid by many men?’”

My Aunt continued…“She had no steel medical instruments for doing her complicated job as we have now. But her fingers were surer than today’s forceps. She never used any anesthetic other than hot water. She did not even need one as her eyes were far more powerful than that. Her one look could make any girl go numb!

She was a permanent invitee to all the households because she was wanted by all at one time or other. She was a woman of very few words. But she was considered to be fantastic in her job. Death of mother or the children at birth were very minimal. So everyone respected her like a divine personality.

She lost her job when a government doctor came to her village and started a Health Center. She became frustrated and got into a depression very soon. She could not take the rejection by the houses where she was always welcome any time. Her life became miserable because she was living on her popularity and her acceptance in every household. She went mad and since then, she has been loitering around the village without any direction.

“Do you know, even you were also brought out to this world by her in that room” pointing to a far corner room of our ancestral home. “Your mother always helped this old woman till her demise. Now get ready for the temple. It is getting too late”. Saying this, she went inside to get ready for going to the temple.

It was a revelation to me and indeed a strange one! The old woman’s hawk-like face loomed before me like a vision. I ran through the lanes full of loose white sand and reached the small hut where she lived. I saw her sitting on the broken steps in shabby clothes. I sat by her side and looked at her intently. I took her hands in mine. I felt a strange warmth in her hands! She was no more a hawk and never a terror to me. I looked at her and she stared blankly at me. No emotions on her face. After a while she slowly smiled and withdrew her hands to hold my face with both her hands. I felt very good! The warmth of the hands I felt for the first time in my life!