Year 1982-83. I spent almost 15 months in Punjab, staying in villages. I was on a World Bank assignment to study the differences of Agricultural Management styles by farmers in Punjab and Bihar. I consider this period as the golden period of my life. Though my HQ was in Jalandhar, most of the days in a month I was travelling and staying in villages mostly in Schools, houses, etc. Till date I am yet to see any better hospitality in my life. You get only best food. You see the best people. You see hard working 90 year old head of the house going to the fields on Tractors! I was travelling all over Punjab on Royal Enfield Bullet Motor Bike! What a life. Only very few spoke Hindi. Forget English! I survived, thanks to my 4 assistants. All of them were Sardarji-s. Rajkumar Singh, Gurnam Singh, Nirmal Singh and Jagjith Singh. Each one of them was very enterprising and very special characters. Heart of heart they were very nice human beings.

Rajkumar Singh, 32, oldest of the lot, is an M.Phil in Psychology but he doesn’t even know what his thesis was because he didn’t write it! He is from a middle class family. But he is a very practical and a very loving person. Gurnam Singh was the most spoilt of the lot. He does all that a Sardarji is not supposed to do. He cut his hair, he smokes, and he doesn’t believe much in Sikhism. But very rich. Nirmal Singh was the softest of the lot! His brains, if works, works very slow. But if you give him a specific task, he does it diligently. He got married during the time I was there and hold on! Do you know what was he got as dowry about which he was talking very proudly? Seven Bicycles! Jagjit Singh is the most intelligent of them and he was a mona. He was the most stylish guy of the group who spoke very good English. And he became a natural leader when it came to work. All the rest of them were very bad in English but was just okay in Hindi.

There were many incidences and experiences which were very interesting and also touching. Giving below one such touching incident.

I visited Golden Temple for the first time along with Rajkumar Singh. On my return, we were at the Amritsar Railway Station to catch the train back to my base Jalandhar. On the main lobby, there is a replica of the Golden Temple around which a railing was built for protect from vandalism. The year was 1983 and Jarnail Singh Bhindranwale, the religious leader and the so called notorious militant was in full glory. He was staying in the Cellar of the Golden Temple from where he operated the entire activity of fighting for Khalisthan. Those days, every household was proud to say that one of their members is a follower of Bhindranwale. As far as Government of India was concerned Bhindranwale was an extremist bordering to terrorism as he was fighting for a separate country Khalisthan, a country for Sikhs. You can imagine those times. Machine Gun firing in the streets were a common site. The militants with all sorts of armour drive through busy streets of cities on a Bullet Motor bike and the two pillion riders sit backwards firing machine gun on both sides. They come and go in a minute. And many dead bodies on the roads. This might sound filmy now but it was the reality I have seen with my own eyes. All these ended with Indira Gandhi’s Operation Blue Star through the courageous Police Officer Julio Ribeiro.

Now coming to the incident, I was talking about the day when I was in the Amritsar Railway Station waiting to catch the train for Jalandhar. I used to be a chain smoker those days. 30-40 cigarettes a day! Except for Gurnam Singh, none smoked. They don’t even touch a cigarette packet! I was surprised once when Rajkumar Singh passed me a book on which my Cigarette packet was kept when I asked him to pass that to me. Though I was shocked, I understood their beliefs and their mind’s strength.

So, I was standing near the Golden Temple replica leaning on the railings around it. Rajkumar Singh had gone to get some snacks for the travel. I took out a cigarette and lighted it. Before even exhaling the first puff, Rajkumar ran towards me and in in one swift movement he took the burning cigarette from my mouth by his hand put it his pants pocket squeezing it. I was in total shock and he took my hands and pulled me into the nearest toilet. From the corner of my eyes I could see some people around me staring at me. He said “Never ever do this mistake. You will get your head cut off in a minute if someone from the sect had seen you”. A couple of Sikhs rushed in and spoke something to Rajkumar in Punjabi. They were not looking dangerous but they were dead serious. He pulled me again and ran through the crowd looking back again and again to ensure that nobody is following us. Smoking cigarette leaning on the railings around the Golden Temple replica could be seen as contempt of the Temple and the whole sect. I never wanted that.

I didn’t have the strength to speak anything till I was in the train and after taking a breath I told to hi m “Thank you for saving my life”. Then many visuals passed through my minds, especially the moment when Rajkumar was handing over a book on which a packet of cigarettes was kept. I had made fun of him at that time saying that no one would kill him for smoking if done inside. He just smiled at that time. And now I was at loss of words. I sat looking at him on a seat opposite his. Í was thinking how he took such a big risk to save me! He slowly slept off and I was wide awake. I couldn’t sleep for a few days thinking of this incidence. Even today I get Goosebumps when I remember that moment.

After completing my assignment, next travel was to Bihar. There also I lived in villages far and wide. But the experiences there were very different and incomparable. After that I tried to connect with Rajkumar Singh by sending letters to his village. But I was not successful. I remembered that he was waiting for an appointment in Punjabi University, Patiala as Lecturer. I searched and no result.

I pray for him for a great life. You are a true friend, my friend.

The B&W Photo of the Sardar is me wearing Rajkumar’s Turban. The color one with long beard is Bindranwale and the the third one is the Replica of Golden Temple in Amritsar Railways Station. 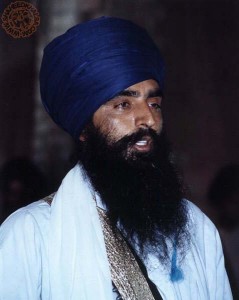 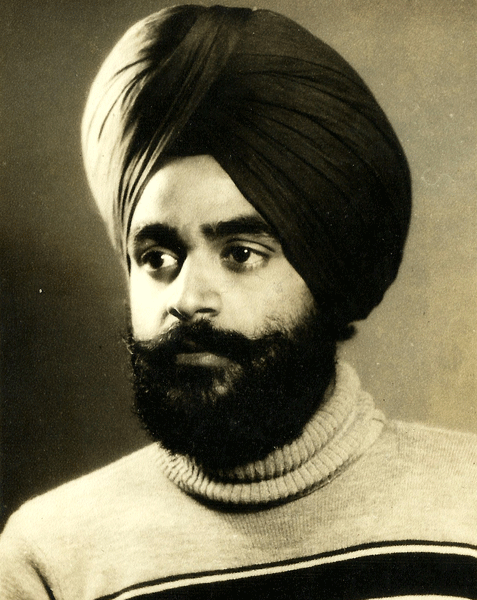 Me in Rajkumar’s Turban